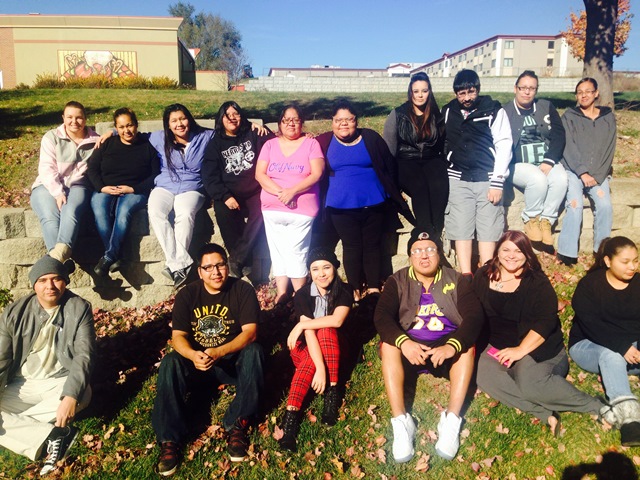 On November 5, sixteen students and two instructors traveled to Lawrence, KS to take a campus tour of Haskell Indian Nations University. Students from all three of the NICC campuses participated in the campus visit. It was good opportunity for students from the different campuses to interact and get together as some had never met each other before. The long drive provided opportunities for deep conversations about spirituality, science, past personal experiences, current undertakings at NICC, future plans and visions, and many, many more topics.

The group arrived at Haskell in late afternoon and began the tour. Haskell is a fairly large campus and many of were taken back by how beautiful and inviting it was. The Haskell tour guides were very helpful and insightful during the tour around campus and showcased some of the educational buildings and resources. The students were also shown some of the different living arrangements and dormitory housing available.

Some of NICC Student Senate members were also able to sit in on a Haskell Student Senate meeting about AIHEC, which is something NICC students have shown integrity and passion about in past years. As a group, the students had the opportunity to get to listen to personal experiences of current Haskell students from different tribes across the country, including: Oregon, Alaska, New Mexico, Arizona and Oklahoma, where they discussed reasons why they chose to attend Haskell. The common theme seemed to be exposure to other Native Cultures, which helped them make stronger connections and feel a deeper pride toward their own cultures and communities. Haskell students also talked about taking classes at Haskell that students might not be able to experience elsewhere. Some examples were culturally specific courses and courses specialized toward reservation businesses, such as Casinos and Gaming and Casino Hotel Hospitality.