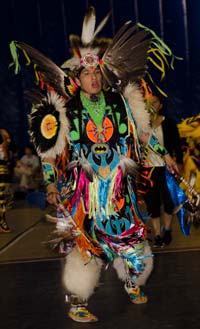 The Omaha Tribe originated because of a division within the Sioux Nation in the early 1500s. They had lived together near the junction of the Ohio and Wabash Rivers, near present-day Cincinnati, Ohio. Migrating westward with the Quapaw, the Omahas settled at the mouth of the Missouri River on the northern edge of present-day St. Louis, Missouri. The Quapaw traveled further south and located on the western side of the Mississippi.

The Omaha, "those going against the wind or current," remained near St. Louis until the late 1700's. At this time, they migrated north up the Missouri River to the mouth of the Big Sioux River, near present-day Sioux City, Iowa. From there they followed the Big Sioux to the Rock River and finally stopped near Pipestone, Minnesota. From here the Omaha began a migration back south to the Missouri River staking out hunting grounds on the west side of the Missouri River, now known as Nebraska. Their territory extended from near Yankton, South Dakota, south to Rulo, Nebraska, and up to 150 miles west, an area of 35,600,000 acres. Their movements are not exactly known over the next 30 to 35 years, but it is recorded that they had villages at Homer and Bellevue, Nebraska and probably several other locations up and down the river. Every eight to fifteen years they moved their village to clean ground and new hunting areas.

Around 1750, the Omaha encountered the first European fur trader in the Bellevue area. Around 1800, the first of these fur traders married into the Omaha tribe. The Omaha thrived through the 1700s, as they were excellent hunters and good farmers. They always grew good gardens of corn, beans, squash and melons. Buffalo served as their general store, providing food, clothing, blankets, rope, moccasins, fuel, shelter, and utensils.

By 1815, the Omaha became very worried about the dwindling bison food supply and protection from hostile tribes. This led to the first signing of a treaty with the United States government.

The tribe today consists of some 5,000 enrolled members with approximately 3,000 residing on the reservation, which is headquartered at Macy, Nebraska. The resident members elect their tribal government on a rotating basis.