June 2021
From GC ReVolt, LLC Facebook page:
GC ReVOLT is thrilled to be a part of a unique and innovative educational initiative at the Nebraska Indian Community Colleges in Macy and Santee. The pics from the class below display highlights of the course GC ReVOLT developed which was focused on "Solar and Alternative Energy Entrepreneurs" which is part of a larger course on developing Native American Entrepreneurs.
GC ReVOLT's Graham Christensen served as Adjunct Professor for the class, and guest speakers included Walthill Village Chairman Mike Grant, Omaha Nation Tribal Council Member Gwen Porter, Scientist Meteorologist and Army Veteran Jim Persson, GenPro's Tanner Jobgen and Molly Brown, and area State Electrical Inspector Todd Flick.
Also a special thanks to Max Christensen and the entire Christensen Electric team, Cody Lofgren and the Freewave Energy team for the incredible installs and for taking the time to allow the students to follow the construction of each campus project. Thanks to the State Electrical Inspectors for offering a special view of what it takes to turn solar power on and start to understand electrical code, and to Burt County Public Power District and North Central Public Power District for the Interconnections. Most importantly thanks to NICC for having a vision around bringing the conversations around energy sovereignty and security from alternative energies to the students. And thanks to the students who participated!
This program is certainly a GC ReVOLT highlight of 2021 and we hope to grow more opportunities on Tribal lands in the upcoming months and years! 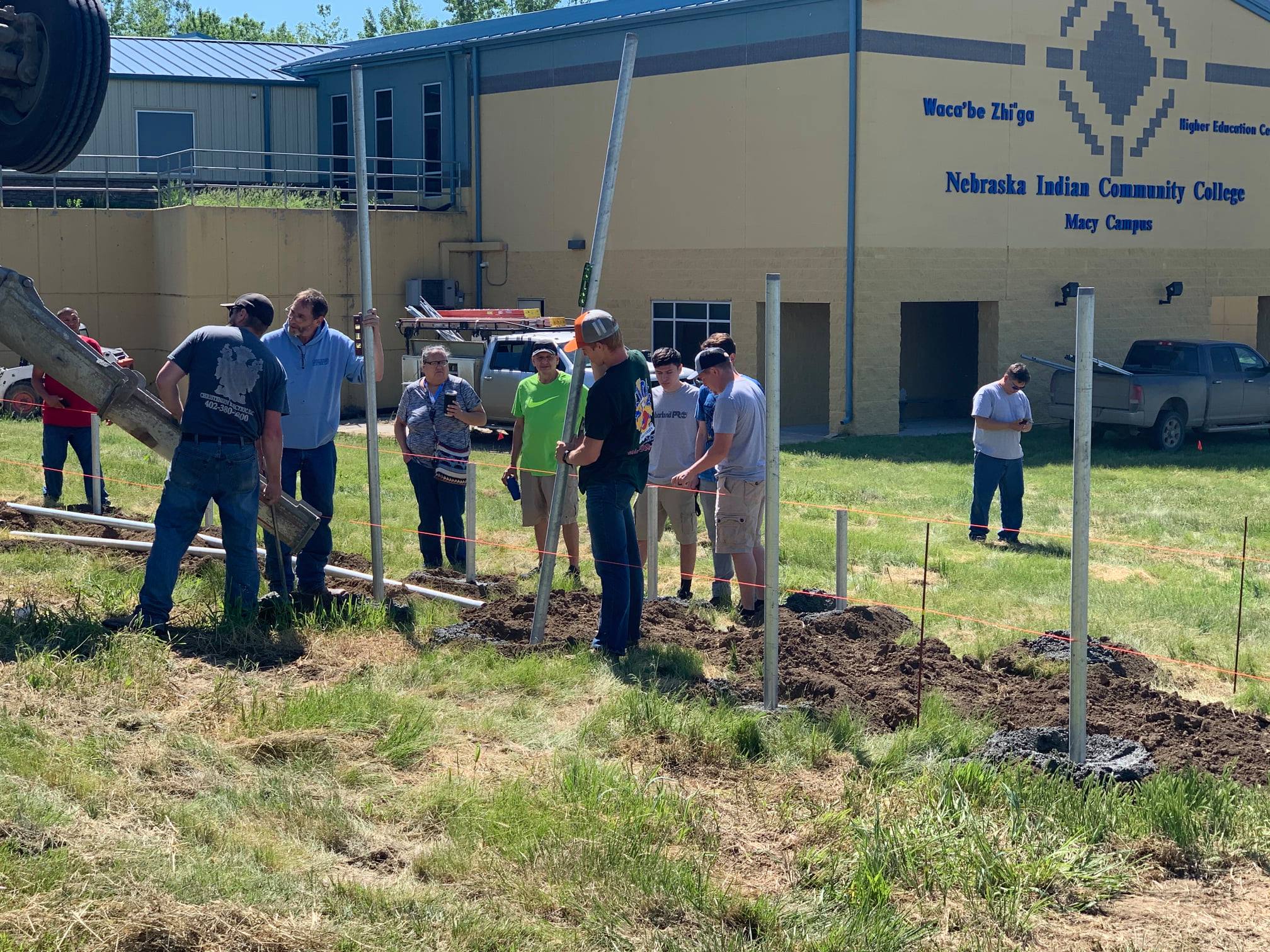 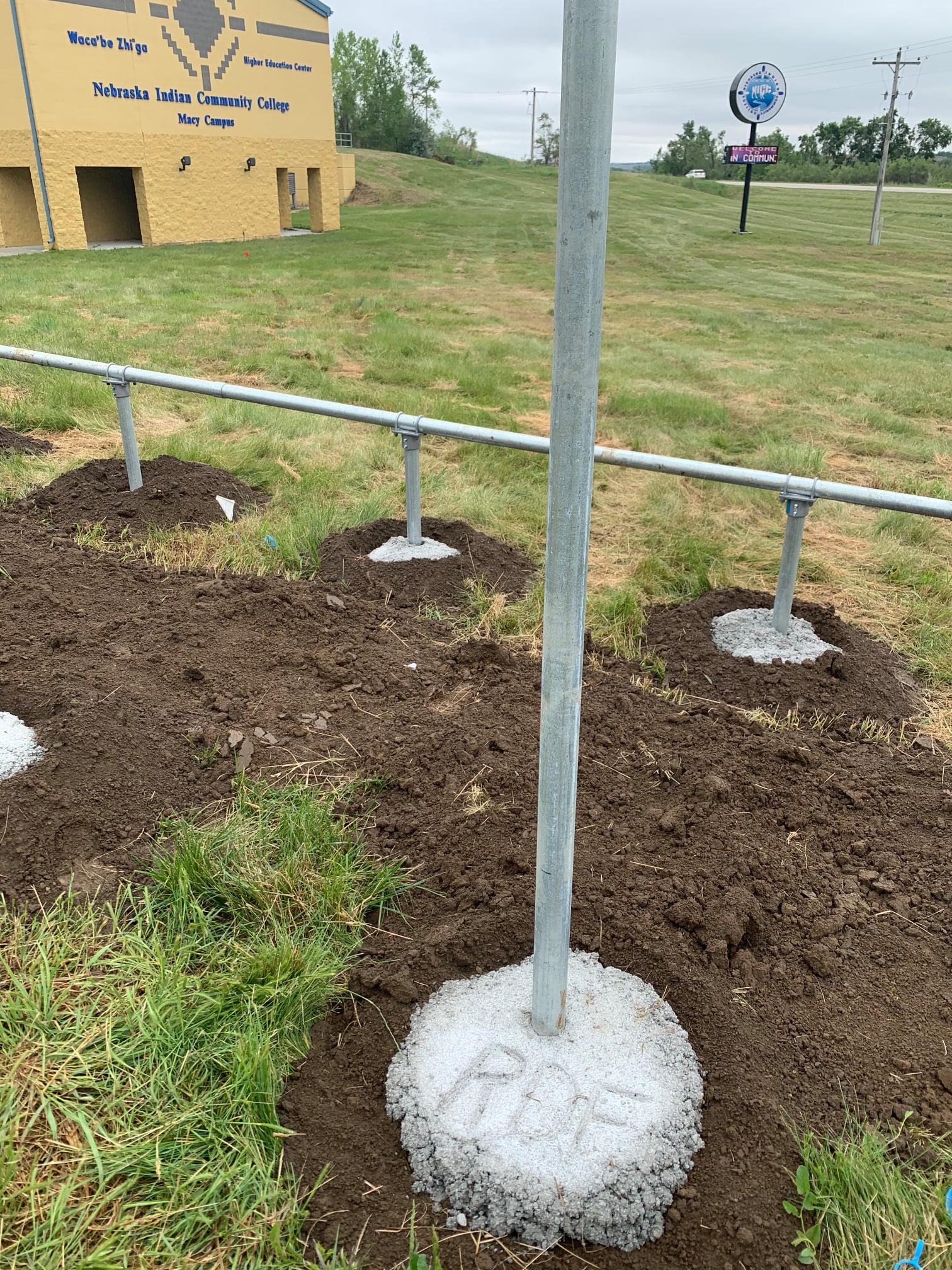 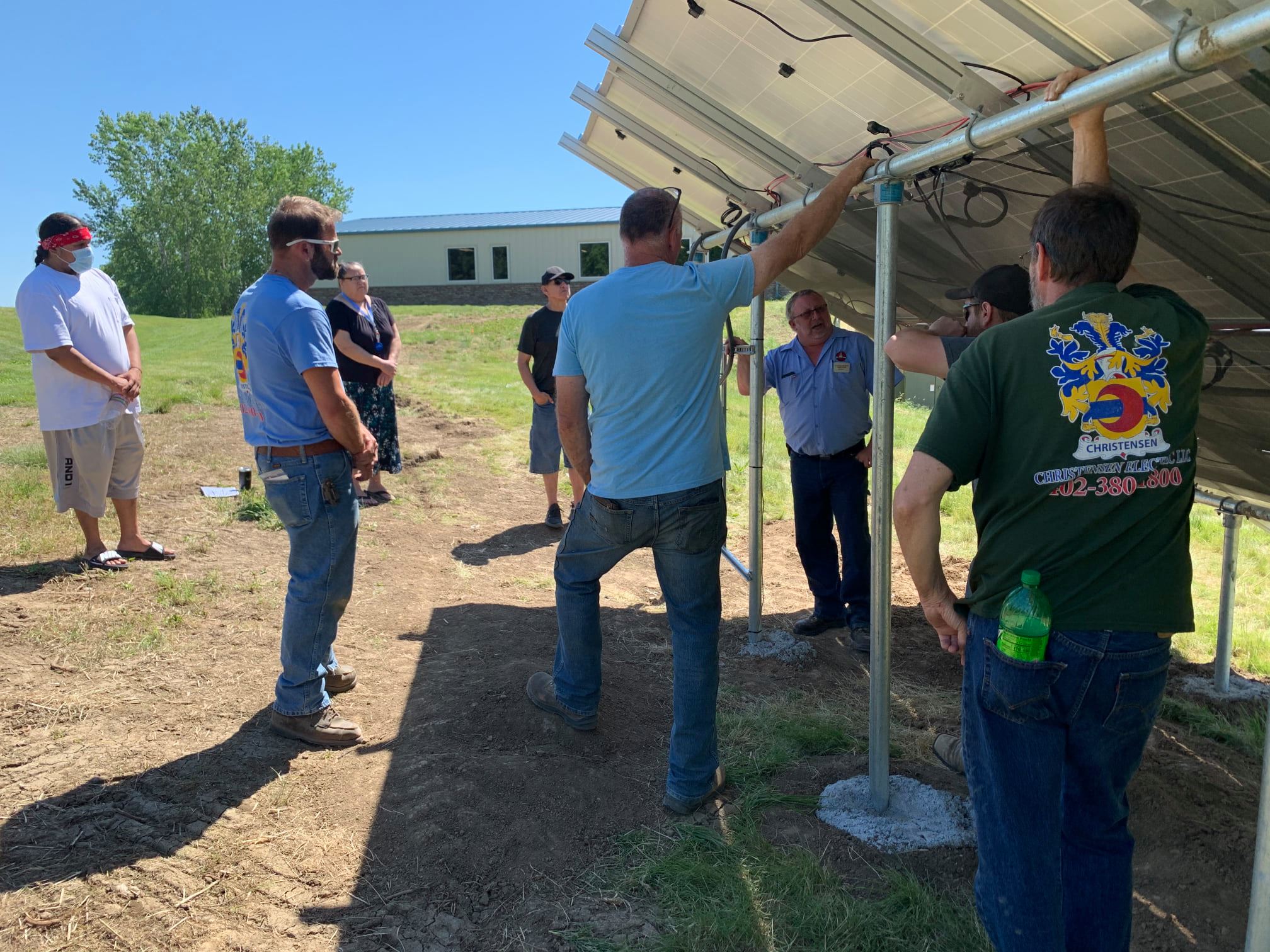 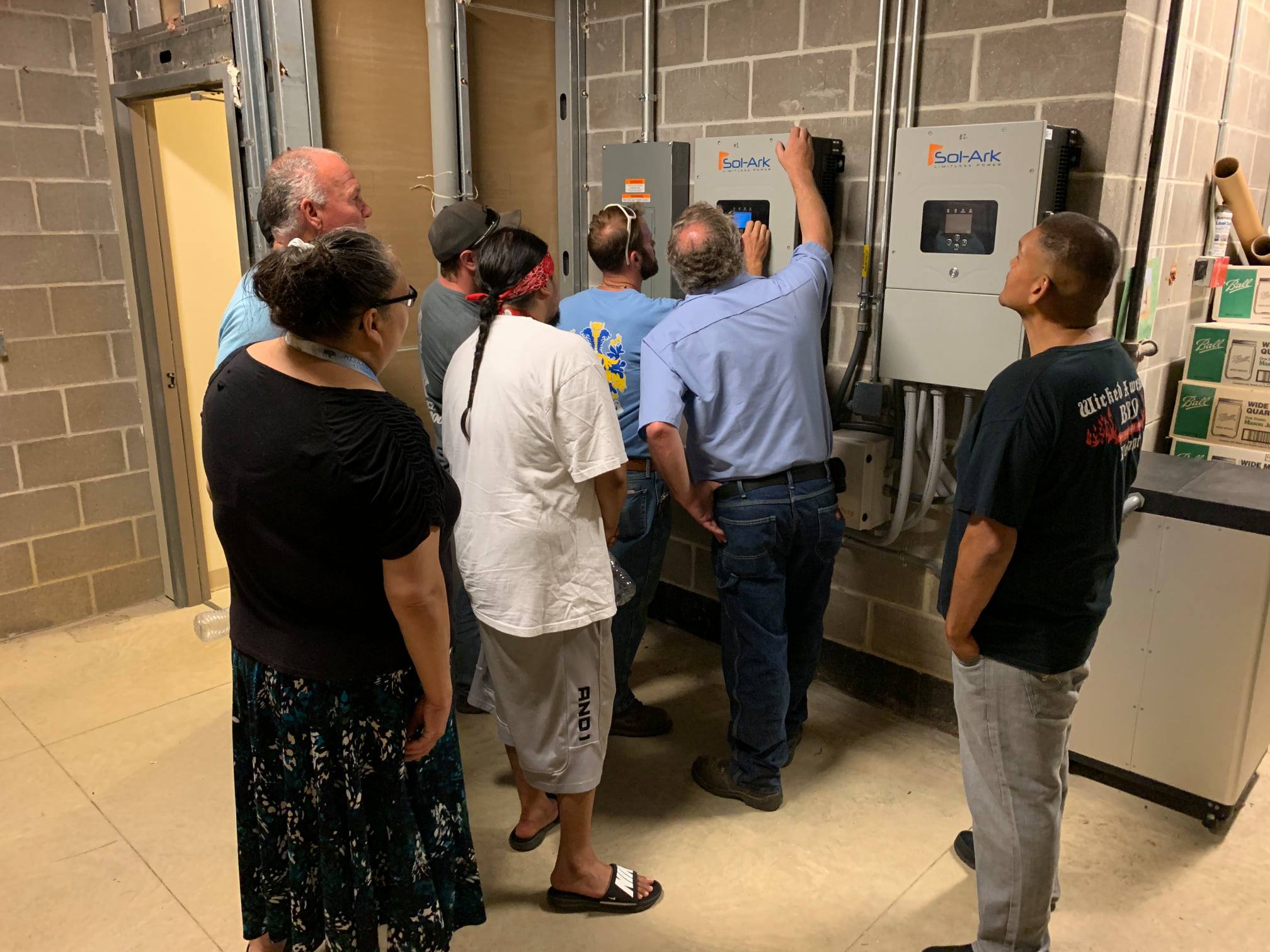 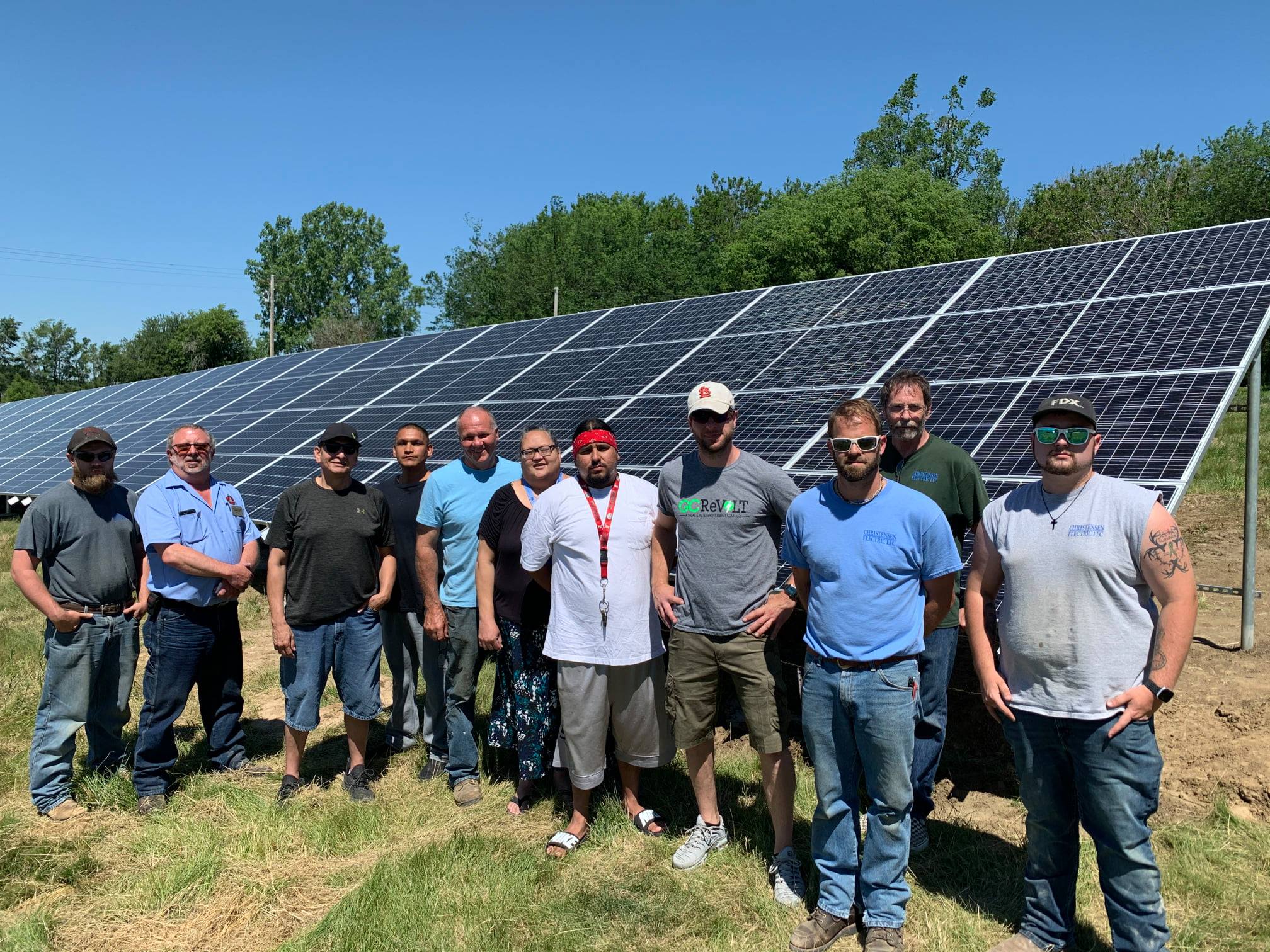 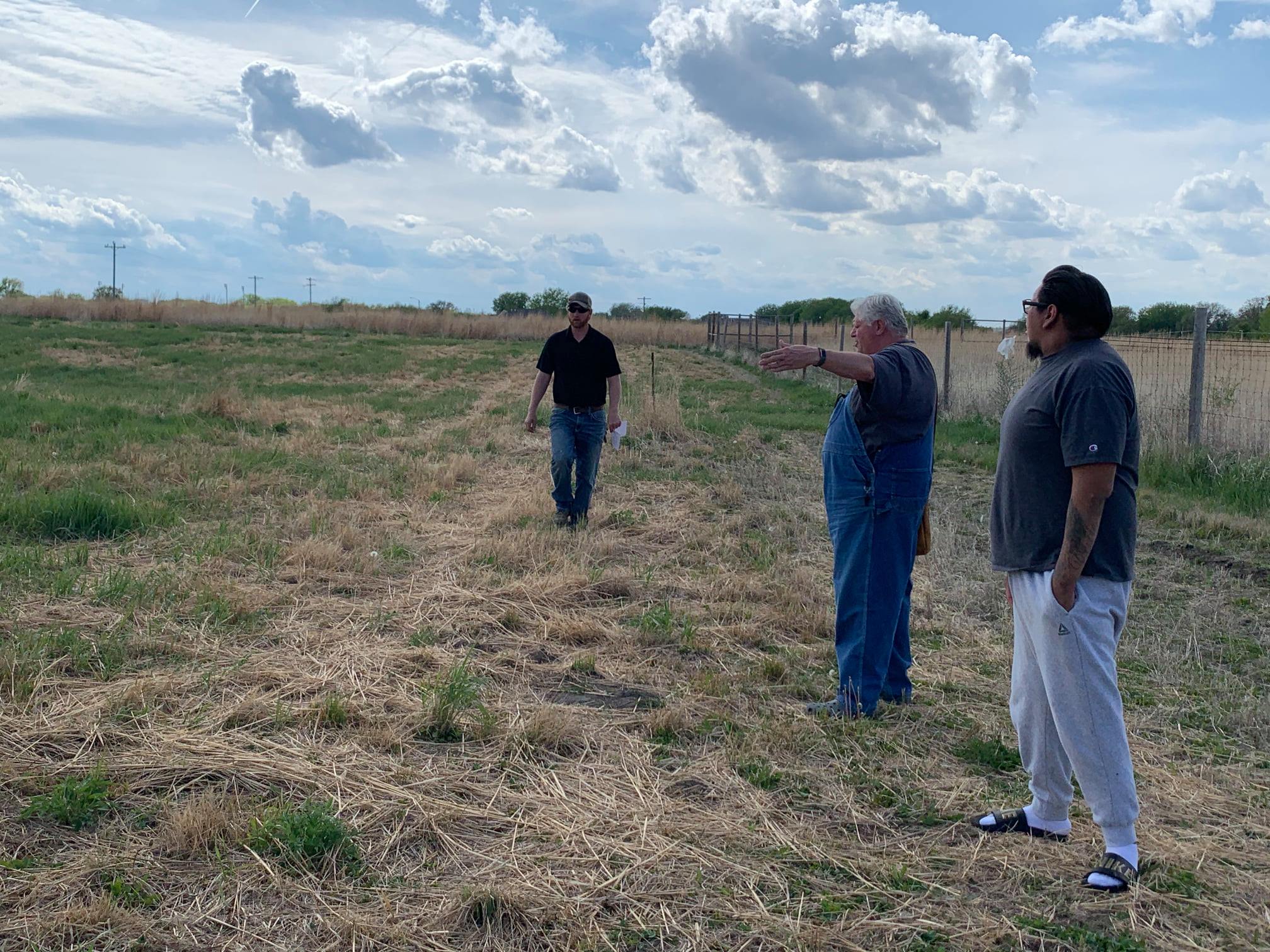 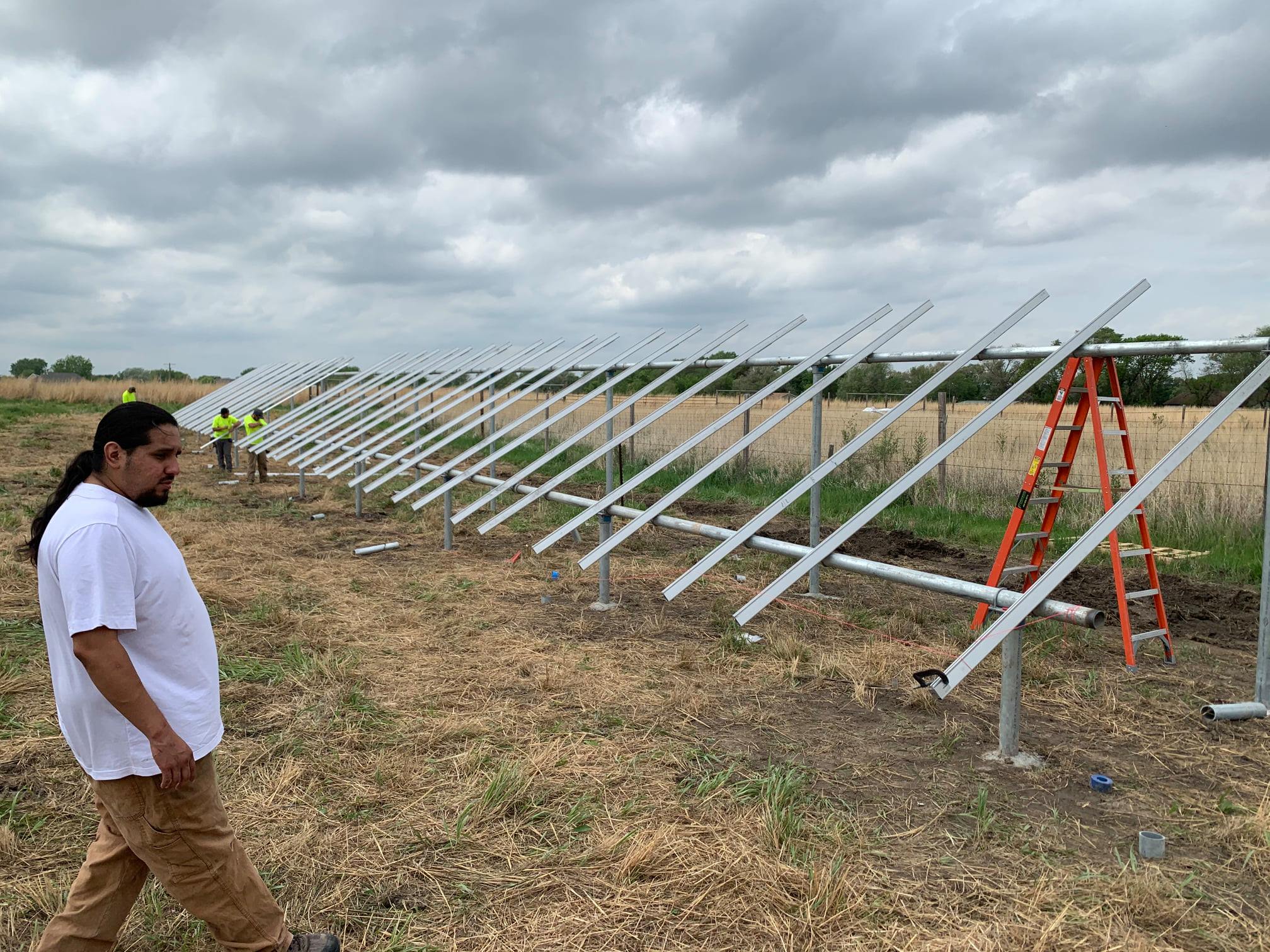 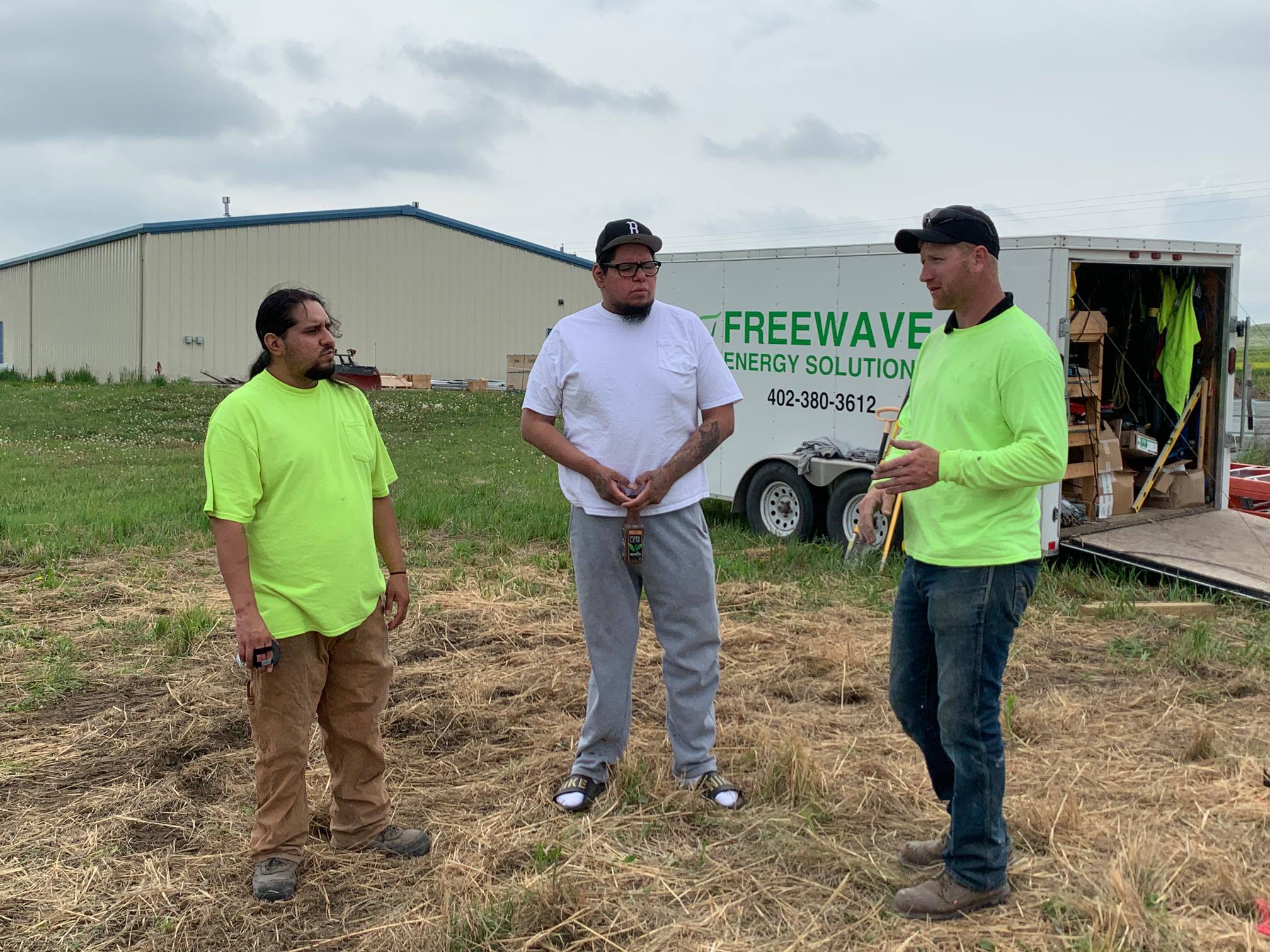 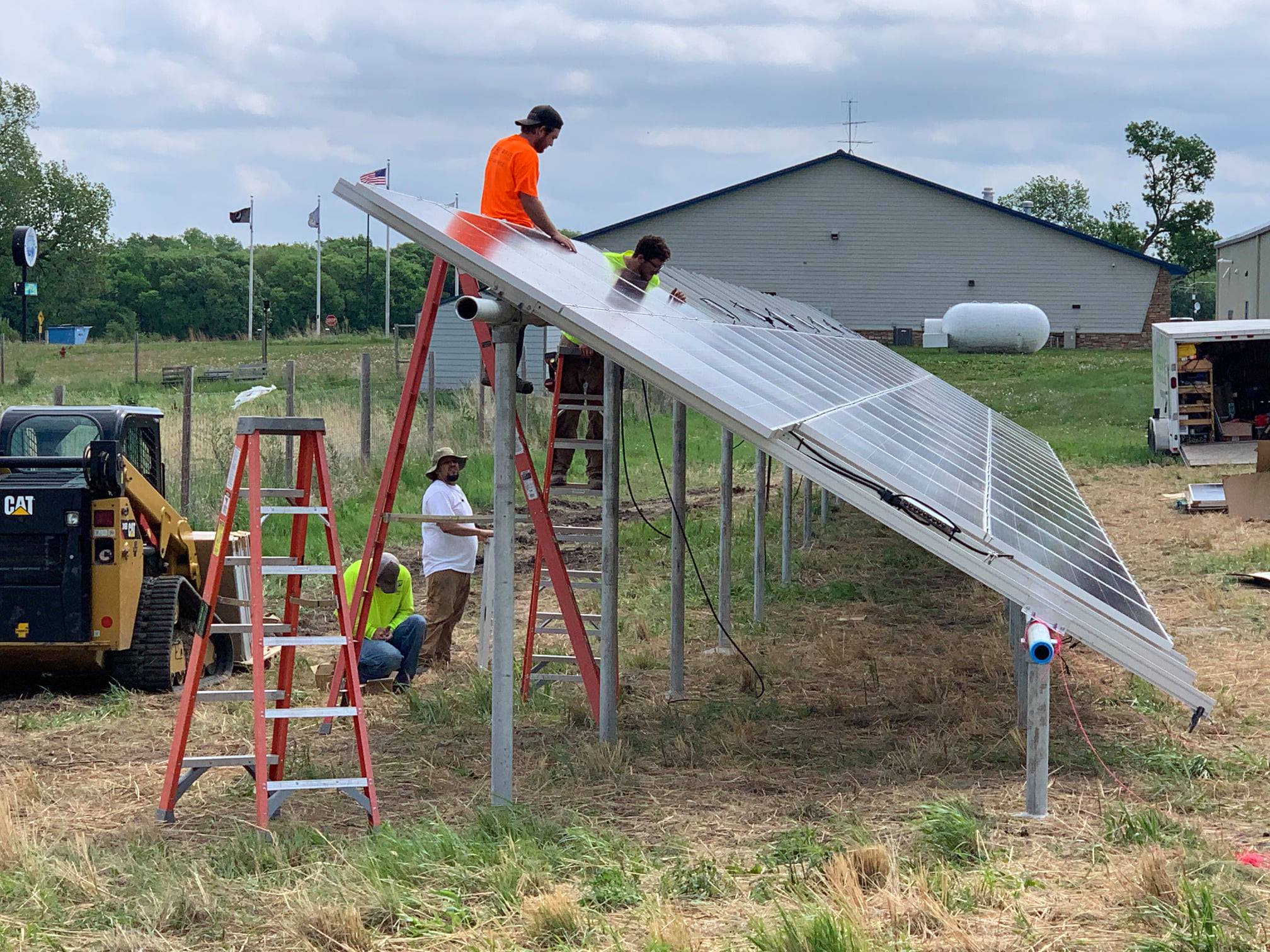 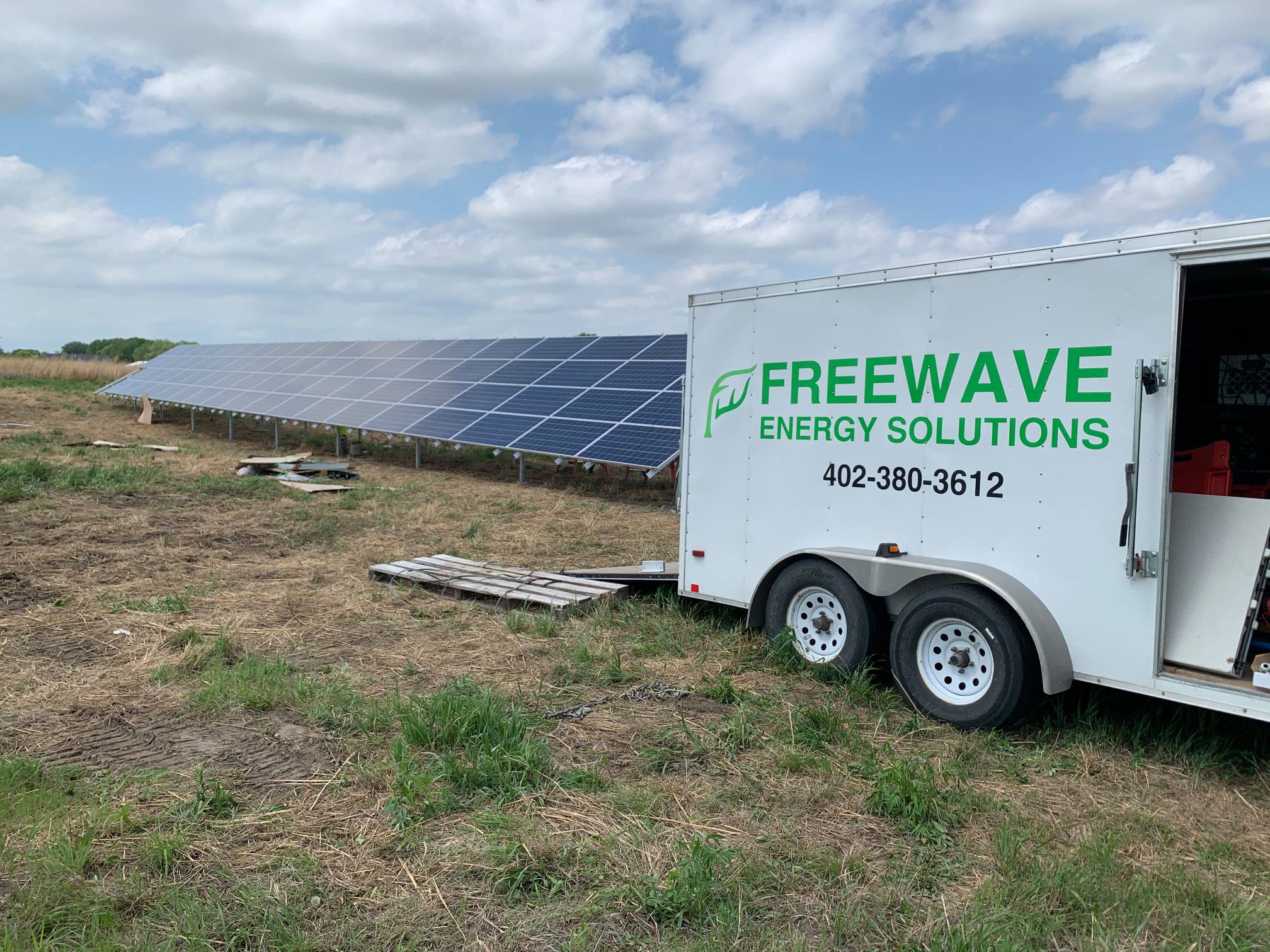 Coming together with partners can often help stretch valuable resources for a project, but it can also amplify and improve the outcomes of the project itself. That's what happened in northeast Nebraska when Nebraska Indian Community College joined forces with the Omaha Tribe, the Santee Sioux Tribe and the Center for Rural Affairs to get more bang for the buck on a food sovereignty assessment effort.

In keeping with its commitment to serve the two tribal nations, NICC was one of the recipients of grants awarded to 39 Native American tribes and organizations to help them conduct food sovereignty or community food assessments in their various locales, from 2016 to 2017. First Nations Development Institute (First Nations) provided the grants, totaling nearly $650,000, under its Native Agriculture and Food Systems Initiative, with generous support from the W.K. Kellogg Foundation and the Indigenous Peoples Fund of Tides Foundation.

The grant allowed NICC to partner with the Santee and Omaha tribal governments and programs, and the Center for Rural Affairs (CFRA) located in Lyons, Nebraska, to carry out activities to encourage community participation in the food sovereignty assessments. Berger is the grant writer for NICC and the grant manager with the project.

We serve 170 students at three locations, and have less than 10 faculty members. Were a very small tribal college and without partnering we couldn't have implemented a food sovereignty project. We have limited staff, and partnerships with this project greatly expanded our reach into our communities, said Berger.

The tribes, NICC and CFRA first held group and individual discussion groups to talk about the food sovereignty projects for both tribes, and the goals of gaining a broader understanding of the current Santee Sioux and Omaha food systems, and how to build interest and support from the communities being served, according to their project report to First Nations.

Information was shared at several locations in each tribes community, including the Omaha Pow Wow Committee meetings, Omaha Advisory Health Fair, the Santee Health Center, and the Walthill library, to name a few.

Surveys were handed out to community members at various events, and were gone over one to one at some events like the Rosalie Old Settlers Days, the Santee Health Center Diabetes Programs Greek salad cooking class, and the Omaha tenant education class.

While social media was used to get initial information out to the communities, it was the activities that were held in person that were the most successful when talking about food sovereignty and getting surveys, which in the end numbered more than 500 participants total for both tribes.

The survey established and identified what we need to address and the interesting pathways that we are looking at delving into for the delivery of vegetables such as mobile veggie vans and working with the tribes to develop a delivery system for people who request fresh vegetables. At the local grocery store, vegetables are imported, but with a mobile grocery store that could create a market for area farmers, said Berger.

The idea of mobile veggie vans would not only provide access to fresh produce, but also fill in the transportation gap that many tribal members experience on both reservations. Even if someone has access to a car, they face an hour or longer drive, one way, just to reach the nearest big-box store. Add on the cost of gas and car upkeep, and this often puts a trip for fresh produce out of the reach for many tribal members.

The communities would like to see a Native seed bank happen, where seeds and roots stocks can be reintroduced. But instead of sending out seeds, keep it in the community and then they own stock in community, said Berger.

There were some traditional foods that drew a large interest in terms of learning how to grow or access the foods, and how to prepare the traditional dishes.

CFRA oversees farmers markets on behalf of both tribes and there is a great interest by both the food producers and consumers to have access to more locally-grown foods. In addition, interest in family or community gardens and container gardens has been on the increase for the past few years in both tribal communities. CFRA works with both tribes and offers garden technical assistance for the challenging growing conditions. In 2017 alone, there were nearly 300 requests for support.

The community gardens have really started taking off. Also, cooking and canning workshops are offered so we can better educate the community on food safety, drying and canning, said Suzi French, Community Food Specialist with CFRA and an Omaha tribal member.

Berger added that often it is hard for people to imagine that there are food inequities or food deserts in their part of the country, as here were surround by corn, but its all feed for cattle.

The food sovereignty assessments have already had a great impact on the Omaha and Santee Sioux tribal communities and the Nebraska Indian Community College, Berger added. The assessments now provide the groundwork and direction for further community-developed proposals to address such areas as the seed bank, how the college fits within food sovereignty, and the overall impact on the health and wellness of all the communities.

This entry was posted in NL07 by rblauvelt. Bookmark the permalink. 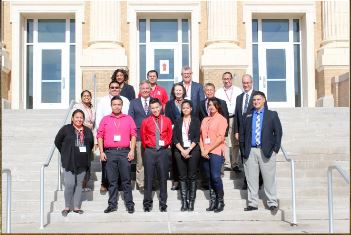 The program allowed us to hear from Native American scholars about their educational journey to achieve their doctorates and gave us the opportunity to network with other students starting graduate programs.

We learned steps to follow when transferring colleges, scholarship opportunities, internships, and strategies to achieve in school.

We also took a tour of the UNL engineering college facilities, as well as Memorial Stadium/Husker Heritage.
This was very motivation and inspiring.
Submitted by Crystal Ross 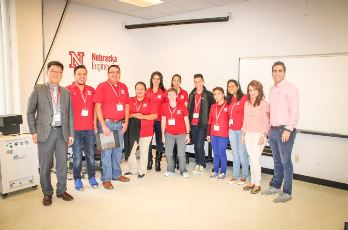 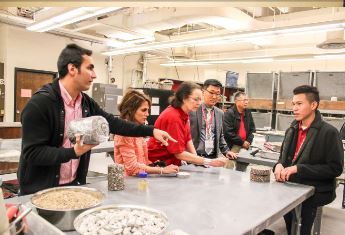 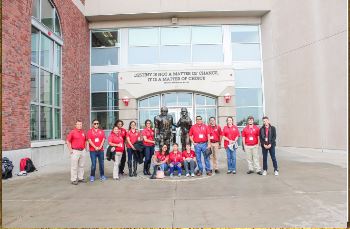