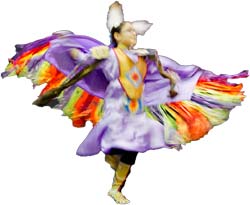 The Santee were the "frontier guardians of the Sioux Nation," that ranged from the Santee's home in what is currently Minnesota, across the Plains and to the northern Rocky Mountains in Montana and south through the northwestern part of Nebraska. Four bands comprised the Santee division of the Sioux Nation, the Mdewakantonwan, Wahpeton, Sissetons and the Wahpekute. The Santee Tribe was basically a woodlands tribe, living in semi-permanent villages and engaging in some farming.

The Isanti originally lived in the north central part of Minnesota, but the Santee's defeat by the Chippewas at the Battle of Kathio in the late 1700s forced us to move to the southern half of the state. The first treaty between the Santee and the government was signed in 1805, ceding one thousand acres of Santee land in exchange for $2,000. Fort Snelling, built in 1819, allowed further white settlement contrary to treaty specifications. The 1837 treaty authorized the Santee cession of all their land east of the Mississippi River. Lands west of the Mississippi were to be allotted exclusively for the Santee. Altogether, the Santee gave up 35 million acres, the "garden spot of the Mississippi Valley."

The 1837 treaty also designated a tract of land in southwest Minnesota for the Santee's reservation. Following the treaty negotiations, Congress failed to appropriate the money for the annuity payments due to the tribe, and the government didn't provide the agricultural supplies and implements promised in the treaty. With the absence of game, insufficient means to raise adequate crops, and lack of annuity payments to purchase food and supplies from agency traders, the tribe faced eventual starvation. These factors contributed to the paranoia and mistrust felt by both sides as isolated outbreaks of violence occurred between the settlers and renegade bands of the tribe.

These factors led to the events which triggered the Santee Uprising of 1862. An argument developed between two young Santee men over the courage to steal eggs from a white farmer. The test for courage became a dare to kill, ending in the killing of three white men and two women. Santee leaders, Little Crow, Medicine Bottle, Shakopee and Big Eagle debated whether to take the offensive against the "bluecoats." The young men, hungry and cynical, eventually convinced their disillusioned leaders that their fate was inevitable. However, not all Santee participated in the uprising and many of those that did helped white people escape their people's vengeance.

Events following the surrender of the Santee and the release of their white captives permanently stained American history. Colonel Henry Sibley, commander of the U.S. troops in Minnesota, imprisoned 1,800 Santee. Many had surrendered believing that they would receive just and fair treatment as promised by the Colonel. However, an Army commission was formed to prosecute the Santee "conspirators," who were denied access to legal counsel. Consequently, over three hundred Santee were sentenced to death. Protest by a handful of concerned missionaries and individuals brought the matter to President Lincoln's attention, who reviewed the cases and commuted all but thirty-nine sentences. One additional Santee was granted a reprieve before the scheduled execution. In December of 1862, thirty-eight Santee were executed in Mankato, Minnesota which is the largest mass execution ever carried out by the US government.

Following this, a reservation site in South Dakota called Crow Creek was selected for the Santee. Two thousand Santee refugees were herded on boats and shipped upstream to this new home. The tribe suffered over 300 deaths during the first months at Crow Creek, mostly due to disease and undernourishment.

Recognizing the unfeasibility of making Crow Creek a permanent reservation site, a reserve in northeastern Nebraska along the Missouri River was finally chosen, and the Santee again moved to a new home in what is presently Knox County. The reservation originally consisted of 115,075 acres. Later, in part through the Dawes Severalty Act of 1887, the land was allotted, which significantly reduced the tribe's total acreage.

Today, the Santee Sioux Reservation encompasses an area of roughly 9,449 acres. The reservation is bordered on the north by the Missouri River and stretches approximately 17 miles to the south and is 13 miles from east to west. The village of Santee is located in the northwestern area of the reservation and borders the river.

The Santee Normal Training School, established by missionaries in 1870, greatly influenced the development of the tribe during the latter decades of the 19th century. In 1936 the school closed because of insufficient funding.

In spite of severe punishment from the US Government and removal from their traditional homelands in 1862, the Santee Sioux nation continues to strive toward self-determination through economic development and education. The Santee Public School District and the Nebraska Indian Community College provide education.